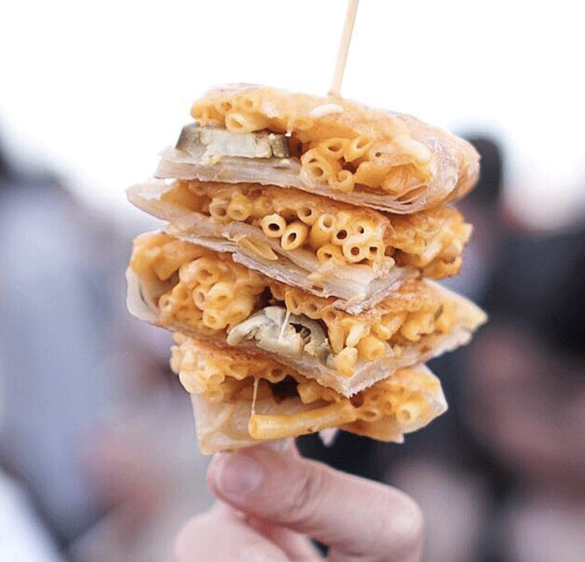 If you chose to stick around Vancouver during the summer months, it’s safe to say that you most likely made a visit to the popular Richmond Night Market. Its hoard of Korean sock stands and long rows of Asian street food welcome over 1 million guests a year.

But one stand continues to stand out – Mamak La.

Mamak – A street side restaurant found in Malaysia, Singapore and Indonesia, open 24 hours a day. [Source]

La – a slang used mainly by people of South-East Asia (Malaysia and Singapore mainly) to complement almost any sentence available in a social conversation. [Source]

For those who’ve been to the Richmond Night Market, you’ve definitely seen or heard about Mamak La – the Malaysian booth that makes an appearance on every “Top Night Market Picks” article out there, each year.

Mamak La Specializes in a Western take on the Malaysian cuisine – “roti”. Roti is a soft bread made from tortilla, often enjoyed with dhal or curry. In Southeast Asia, roti can be enjoyed throughout the day – as breakfast, lunch, dinner or even supper!

Growing up in Canada, Mamak La Owner, Eugene Loh, missed the type of food he had from his hometown in Malaysia. But he also knew that Malaysian food might not cater to the tastebuds of Vancouverites. In 2015, he followed his passion and created Mamak La, serving Malaysian food with a Western twist.

It Wasn’t A Walk In The Park For Eugene

Before opening up Mamak La, Eugene worked as a waiter in a local restaurant, but even then, dreamed of becoming a sous chef. His parents were also not supportive of a “mamak style restaurant” and believed that “no one is going to buy roti”. It was because of this that Eugene wanted to prove that he was capable of becoming a chef.

The year before he started Mamak La, Eugene returned to Malaysia to master the art of “roti”, and in the summer of 2015, Mamak La opened its doors for the first year at the Richmond Night Market.

What makes Mamak La different from traditional Malaysian food is their Western approach. The first items to make the menu were the Roti Mac N Cheese, the Roti Telur aka “The Dip”, and The Chicken Cone. Their bestseller – the Roti Mac N Cheese was created based on Eugene’s own experience of growing up in Malaysia and Canada.

“I ate lots of Mac N Cheese as a kid, and when I went back to Malaysia, I had roti everyday. So I decided to combine both my childhood foods”

After Mamak La’s success in 2015, Eugene once again went back to Malaysia for more research. With how successful Mamak La was in its first year, he needed to learn how to keep up with demand and figure out how to make more rotis in a shorter period of time. He also wanted to learn how mamak’s made their drinks such as the Teh Tarik (translates to pulled tea, tastes similar to milk tea), Milo Ais (iced Milo) and Kopi Ping (iced coffee). His efforts proved successful as Mamak La was able to expand their menu.

Inspired by KFC’s “Chick-zza” from his last trip back to Malaysia, the Roti Pizza is catered towards vegetarians as there are not many vegetarian dishes at the night market.

Another popular item on their menu is the Roti Cone, which they combine satay skewers with roti. Coupled with their homemade peanut-free satay sauce, this dish comes highly recommended.

For dessert, Eugene recommends the Roti Banana, which is roti and bananas coupled with chocolate and condensed milk.

My personal favourite is the Roti Telur, which combines roti and egg, creating a wholesome and delicious dish.

In addition to adding more items to their menu, Eugene hopes to be able to open a restaurant or food truck in the near future so roti lovers can enjoy roti all year round.

You can find Mamak La at this year’s Richmond Night Market every weekend at stall F102.

A fourth year nutrition student with a big love for food! After spending a summer interning in content creation, Selena realized her true passion was in writing and changing the world with words. You’ll probably find her at the ice rink or at your local hot pot/dim sum restaurant.

How Can We Help Our Planet Through Our Eating Choices? Sustainable Dining w/ Forage Chef Welbert Choi and Fable Diner Chef Josef Driemel

Updates on what's yummy in Vancouver to your inbox.
Go to Appearance > Customize > Subscribe Pop-up to set this up.